This was and still is a beautiful catchment.  Our creeks and streams define it, give it value and carry some of the affects of our management here downstream into the larger Murrumbidgee Catchment that we are a part of. 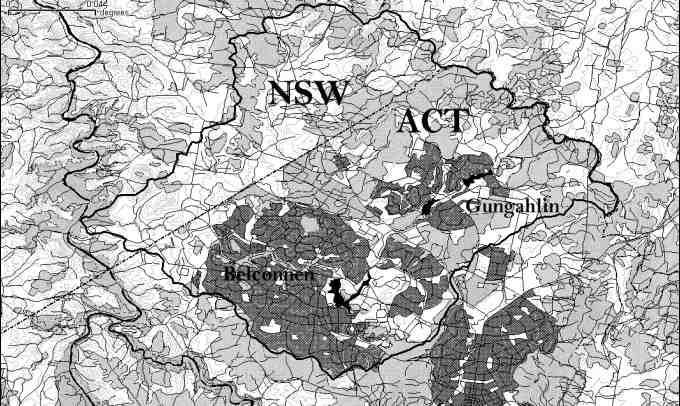 There is a lot to do in relation to these riparian environments and a lot has been done already.  We have Waterwatch, Frogwatch, a Landcare focus and ACT Government actions all focused on our waterways.  They are important and the work we do with them carries on the benefit to our nations largest river basin. The Murray Darling Basin.

The creeks within the Ginninderra Catchment have been very affected by changes in water flow regimes first as a result of grazing activity then urbanization.  Watercourses can be very affected by peak flow events that can change landscapes dramatically or by increments.  We have created the conditions where water is shed from the catchment at an increased rate in heavy rainfall.  We are actually following on from a very long history of this type of affect.

This problem did not begin with urbanisation but was continued on and perhaps increased by it.  The affect of water flow on Ginninderra Creek was recognised as plans for urban development were being assessed in the nineteen sixties and nineteen seventies.  This is an exert from page five of a document released in 1978 by the National Capital Planning Authority entitled “Ginninderra Creek Open Space.

The more vegetation there is to intercept and slow down the shedding of water into a watercourse, the more regulated the flow of the watercourse then is.  Healthy plant communities fulfil this function over the entire catchment.

Within the creeks and streams themselves, plants used well can be an effective means of dissipating some of the energy of water flow.  Many of the solutions traditionally used to “solve” water flow issues are based on engineering the waterway to get water away as quickly as possible.  Sometimes this is to prevent flooding and where flooding is an issue this must be taken into account. So techniques like stonewalling can have a place in some instances but can also simply result in transferring problems downstream and if you have done this enough within your catchment, you can contribute to very serious damage. 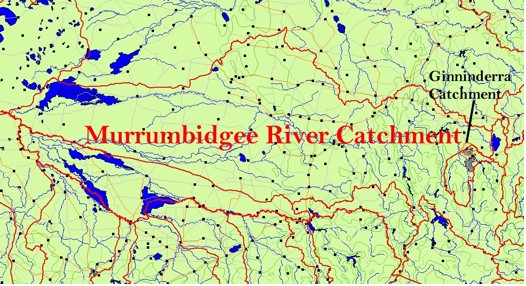 Below is a photograph of where Gooromon Ponds creek joins Ginninderra Creek.  The huge amounts of water that rushes down a relatively straight run through Macgregor hits a sharp bend as the water flow from Gooromon ponds joins it from the right of this picture.  Erosion upstream from here is bad and downstream from here is worse.  Grazing activity on the banks has been a large part of the problem but scouring out by the creek is the big driver here.  Sediment and debris is mobilized causing more environmental issues including making the erosive force worse as solid material abrades the creek bank further as it rushes on. 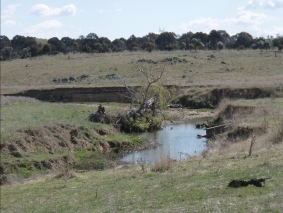 We have an effective list of plants indigenous to the creek.  Some are as tough as nails and can handle a wide range of conditions.  They can serve to stabilize the stream banks and to also dissipate some of that energy but this has to be done over the entire area wherever it is best suited to do so.  Reeds and rushes can also cause some of the sediment being carried to drop out and thus create new niches for more plants and other aquatic life.  However reeds like the bulrush (Typha orientalis) can also have undesirable affects if growing in a section of the creek with bank erosion problems by directing water flow to sensitive areas. Problems can also be caused by reeds choking flow and increasing flood risk to flood prone areas.  You have to pick your species for the task at had.  Bulrushes have a strong place in the creek but not everywhere and we have many other plants to use that were once here in greater numbers. 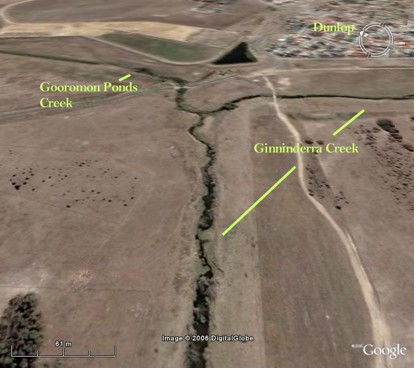 In this photo of the area from a satellite, the dramatic affects of the turbidity of the creek can be clearly seen. Treating the problem here involves treating the problem over the entire catchment that flows to this point.  That is taking a whole of catchment approach that recognises that to treat a problem you have to deal with its cause. This damage is showing us that water is flowing far too hard from upstream and causing problems.  Ginninderra creek is in transition and we cannot stop that but we can do our best to minimize its undesirable affects by working with it as it changes and using its own vegetation in conjunction with engineering where needed such as the use of gabion weirs.  In 1832 this same area of creek was drawn like this, 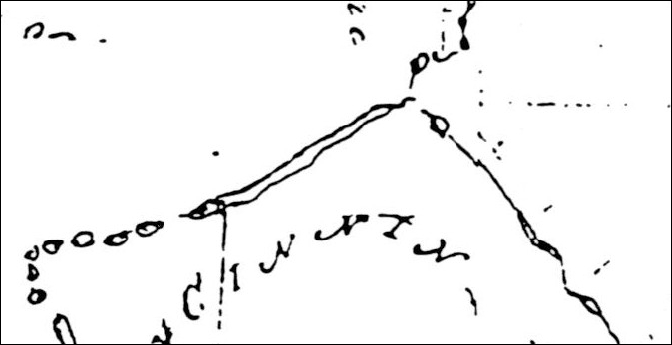 Most references indicate that Ginninderra Creek consisted of an interlinked chain of ponds.  I have looked around this and adjacent catchments for remnants of riparian environments that give an indication of what it was like here.  Both Paul Hodgkinson and I have noticed an area along Murrumbateman Creek that holds some interest in this regard. There is erosion here but also very healthy plant communities. Here are some photos, 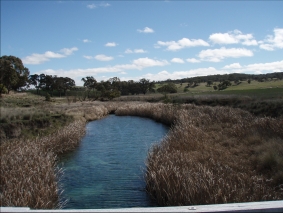 This community was dominated by Poa labillardieri and Typha orientalis

Riparian plants in this area included, 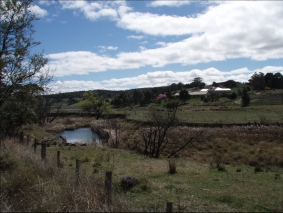 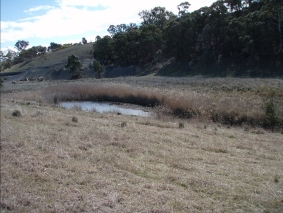 This map shows the location from where these photos were taken.  They are not from Ginninderra Catchment but from an area that adjoins it. The altitude is 627 meters. 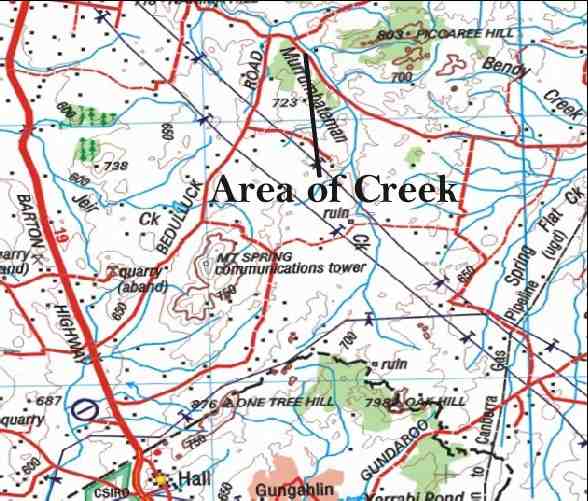 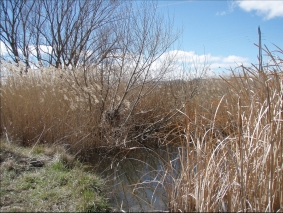 This is Gooromon Ponds Creek just beneath the Wallaroo Road Bridge.  The reeds are Phragmites australis and Typha orientalis. The altitude is 580 meters. 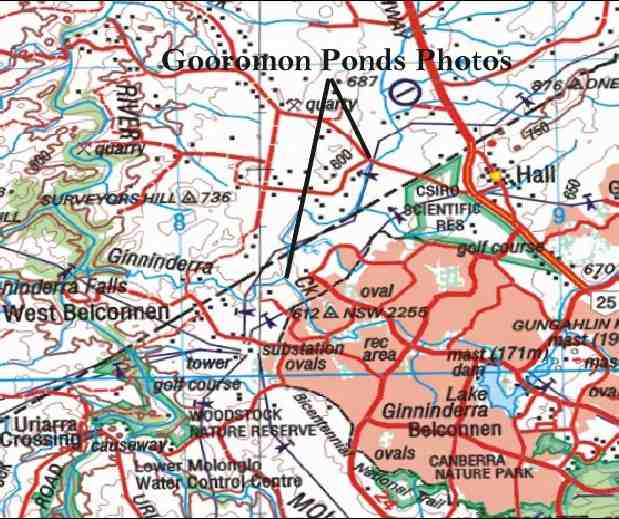 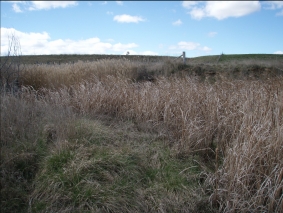 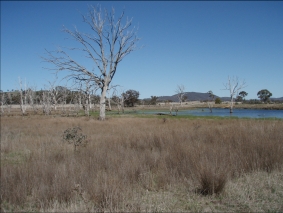 Mulligans flat contains a number of substantial dams and ephemeral water courses.  Many of these contain a rich variety of reeds, rushes and grasses that have thrived.  These include,

The altitude is 630 meters.

Carex appressa along Talangandra lane in NSW is the subject of this photo and the next one. Altitude is 624 meters. 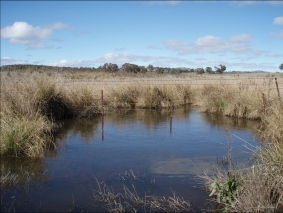 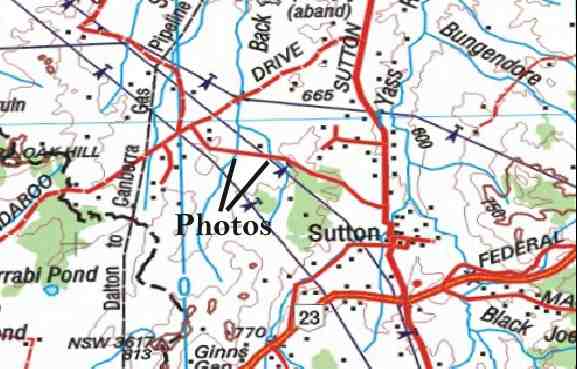 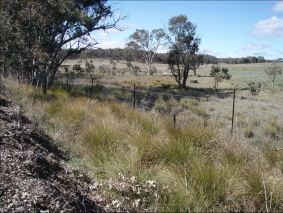 Carex appressa is a very common sedge in our catchment and is extremely hardy. It tolerates a wide range of conditions.  It can even grow into dryer areas and becomes a weed of pastures especially when grazing is too heavy.  Stock will not eat Carex. It is coarse and sharp with fine serrations along the edges of the leaf blades that can cut your finger.  For us it is a good lower growing, soil binding plant that creates very good habitat.  In a recent planting in McKellar wetlands, it was the Carex appressa which thrived along the frog corridor while other plants dried out.  I believe that it was once much more common along the creeks of our catchment than it is now. 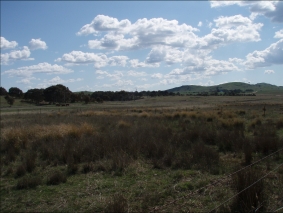 Here is an example of Carex appressa and Juncus sp. growing as pasture weeds in paddocks along Ginninderra Creek just past Macgregor.  This area is just beyond a break of slope coming down from Dunlop which some of members know well as they live on these hills.  The hills were behind me as I took his photo.  The area is fed with water run off due to its position and grazing has advantaged these rushes. The altitude is 550 meters.

That fact that they are here shows that they were a component of the riparian environment of the area.  They have not persisted in many other places in such numbers where competition from phalaris, willows etc. has had its affect along with the scouring out of the creek.  They may also have been controlled as weeds.  I find Phalaris aquatica in my travels in many places where I would have expected to see plants like these.  Poa labillardiari amongst other species shared its fate.  The species lists supplied with this report give some idea. 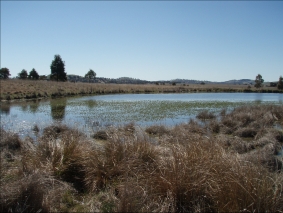 This is the pond below the Kangaroo grassland in Dunlop grasslands.  Again Carex appressa is present and also Juncus sp. (usitatus?). The altitude is 590 meters.

What These Areas Show Us

These areas do illustrate that our catchment is host to a very wide range of aquatic plants.  The full variety is beyond the scope of this document but what we can begin to see is the way these species belong here and serve important functions.  We also still have very healthy populations to draw on and observe.  Looking at where plants do well within the landscape is our best indication of what they can do for us.  Over time environments have always changed and fluctuated.  Organisms including plants adapt and can promote stability and ecological health.

Note: All maps incorporate data that is © Copyright Commonwealth of Australia  (Geoscience Australia) 2006 except for the historic map used in this document.