The Ginninderra Catchment is rich in culturally significant sites.  Ginninderra comes from a Ngunawal word for sparkling water. 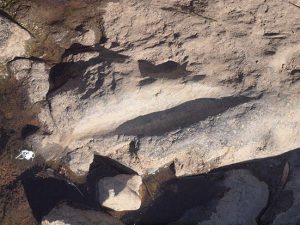 Ginninderra Creek, which flows into the Murrumbidgee was an ancient pathway for Aboriginal people.  Ngunawal people used the area of land in the Ginninderra Catchment for over 20,000 years and the landscape in this area contains extensive evidence of Aboriginal use. There are a diversity of sites such as scar trees/hatchet tree, ochre quarry sites, rock artefacts, axe-grinding grooves (see picture on right, Umbagong Park) and more.

Since 2013, GCG has been working closely with Ngunawal custodians to protect and restore Aboriginal cultural sites in the Ginninderra Catchment and offer community education about the cultural significance of the area.

In 2014, Mulanggang Traditional Aboriginal Landcare Group was formed, as a member group of GCG, by Aboriginal custodians living in the Ginninderra Catchment.  This group is working to maintain and restore Aboriginal heritage sites in the area through planting events and weed control.  The group also provides guidance for Aboriginal youth and interprets landscapes and Aboriginal culture for the broader community.

Since human occupation by the Ngunawal people at least 20,000 years ago, the Ginninderra Falls and surrounding area has been recognised as a special place. Early European occupants also recognised its value. The unique geology and plant and animal communities and cultural heritage values of the area make it an extremely significant area. We need to ensure that this special area, the biodiversity and the cultural heritage values are protected into the future as they have been in the past.

There is currently a proposal to develop land in close proximity to the Ginninderra Falls and Ginninderra Gorge. The Ginninderra Catchment Group’s position on this development is that it is not adequately precautionary, from a reserve design point of view, to adequately conserve the full range of values present at the site.

This position has been arrived at after consulting experts on likely impacts of development on threatened species that are known to occupy or are likely to occupy the area and takes into account the concerns of community members and Aboriginal custodians.

In order to maintain the cultural, biodiversity and aesthetic values of the area, the Ginninderra Catchment Group’s position on the proposed rezoning of the land is that environmental land should not be rezoned to residential land and that land currently zoned as rural near the Ginninderra Falls should also not be rezoned to residential. Rather, the land should be managed as a connected landscape for protection of the high values in the area.

Aboriginal cultural heritage is in the landscape all around us. In June 2014, members of the community joined Ngunawal custodians, Wally Bell and Tyrone Bell and Archaeologist, Sophie Collins to learn more about Aboriginal artefacts and how archaeologists go looking for them.

This interpretive walk was one of a series of walks held in collaboration between Buru Ngunawal Aboriginal Corporation, Thunderstone Aboriginal Cultural and Land Management Services and the Ginninderra Catchment group. The project was funded by the ACT Government and the Australian Government with funds made available under the ACT Heritage Grants Program.

This series of interpretive walks was a collaboration This project is part of a collaboration between Buru Ngunawal Aboriginal Corporation, Thunderstone Aboriginal Cultural and Land Management Services and the Ginninderra Catchment group and was funded by the ACT Government’s ACT Heritage Grants, and the Australian Government’s Indigenous Heritage Programme and National Landcare Programme.

Gubur Dhaura is Ngunawal for “Red Ochre Ground”. Ngunawal custodians Wally Bell and Tyronne Bell have led interpretive walks and restoration activities at the site to protect and restore the site and to teach members of the community about its special significance to the Ngunawal people.

This project is part of a collaboration between Buru Ngunawal Aboriginal Corporation, Thunderstone Aboriginal Cultural and Land Management Services and the Ginninderra Catchment group and is funded by the ACT Government’s ACT Heritage Grants, and the Australian Government’s Indigenous Heritage Programme and National Landcare Programme.