Regular Activities and Working Bees: Our activities focus on weed management, erosion control, community awareness-raising and planting native vegetation. We have working bees on the fourth Sunday and first Monday each month.

Aspects of the history of the Mt Rogers Landcare Group with newsletter-texts and members’ photographic contributions can be traced on the blog: www.mtrogerslandcare.blogspot.com

About Us:
The Mt Rogers Reserve is a ridged area of Urban Open Space surrounded by the suburbs of Flynn, Fraser, Spence and Melba. The 704 m summit affords 360-degree views across the ACT and into NSW. 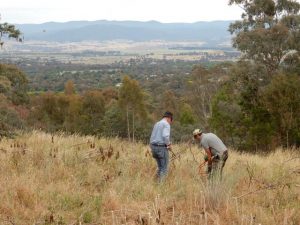 When the suburbs were developed in the early seventies, assorted native trees and shrubs were planted around the existing sixty 250 – 400 year old eucalypts.

Landcare activities on Mt Rogers began in 1999 with informal weeding and occasional plantings of native species by a few interested and concerned local people. There are areas of residual native grassland beside and within the woodlands.

Volunteer landcarers have surveyed flora & fauna for many years. Results and observations guided and guide weeding efforts and newer plantings of local species so the reserve’s biodiversity improves over time.

12 years ago, plantings of tubestock propagated by Greening Australia volunteers were concentrated into land ‘uphill’ of the gravel path that circles Mt Rogers. Landcarers welcomed the assistance of Ginninderra Catchment Group, Conservation Volunteers Australia (CVA) and Guides Australia for these events. The success rate has been encouraging in spite of drought periods.

The Landcare Group, which was formalised in 2009, now has a core of about 10 volunteers who give time at scheduled working-bees twice a month or at other times that fit in with their busy lives.

We have concentrated on the removal of invasive environmental weeds such as privet, cotoneaster, pyracantha and hawthorn, learning and developing individual skills as we work. Once invasive species are removed, local native species thrive. 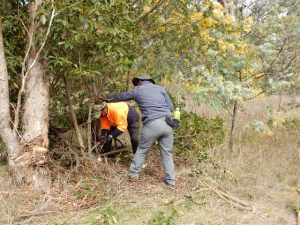 We work with the government’s land managers for Mt Rogers. They are part of the TCCS network and provide operational support for maintenance and management of invasive species.

In 2011, 2013, 2018 and 2019 areas of Mt Rogers were burnt as part of the ACT Bush Fire Management Plan. This process will extend to the north of the reserve in due course. The floral and faunal species lists compiled by Mt Rogers’ volunteers are sent to the Environment Department to add to ecologists’ records. The volunteer-run Canberra Nature Map welcomes photographic GPS-located records of species sighted on Mt Rogers and from places within a 300 km radius of Canberra. Citizen science at its best.

Contractors, employed by TCCS, survey for and spray outbreaks of Serrated Tussock, Chilean Needlegrass and African Lovegrass through the reserve. Our trained volunteers regularly treat these grasses and St Johns Wort. We are also vigilant in searching for new incursions of weeds as the climate changes and as birds distribute newer species’ seeds from suburban gardens.

For some 7 – 10 years the spread of African Lovegrass and Chilean Needlegrass has been noticeable. Some efforts to address this invasion have been made, but mower-spread is an intractable problem.

For over  6 years the Mt Rogers community has been drawn together through the publication of occasional newsletters that highlight observations and sightings of species. We have become more informed and more observant. Some of us have become amateur naturalists as we seek answers to the intriguing questions triggered by  the bush and its habitats.

Newcomers to the reserve are offered an attractive brochure about Mt Rogers which is in its second edition.
As landcarers we are drawn together by affection for, and strong connections with, our patch of remnant bush and by the sense of community our regular walking and working generates.
We enjoy making a difference and learning about the trees, shrubs and forbs and animals whose chances we enhance.