There has been a lot of work done toward mapping high value native remnants in the ACT. This is especially so in regard to the grassland and woodland communities that dominated so much of the Ginninderra Catchment.  To see the current best expression of this work, please refer to the strategies as well as an excellent map from the ACT government that are supplied in the “resources folder”.

For our benefit however we can also begin to use our capability to complement this knowledge and increase our understanding of these environments.  This by making sure that we are conscious of where they are within our Landcare area and how we can be involved in assisting with their maintenance.  We can also use knowledge gained to conduct trials on rehabilitating some of the more degraded areas still retaining indigenous species or areas adjacent to good grassland and woodland.

It would be useful for the Ginninderra Catchment Group to begin its own process of locating and mapping areas of interest to us that may or may not be included on government maps.  Some of these areas do not appear on the government maps due to their size or state of degradation. However they can still perform many desirable environmental functions as we promote the species within them and deny problem species a place. These grasses, forbs shrubs and trees are part of the tool kit of species we have to manage problems with. Take Chilean needle grass for example – part of the treatment of this perennial weed is competition from faster growing perennial grasses.  It is a slow grower compared to many other grasses.

The data from the mapping work undertaken is easily data based, updated and shared.  Differences between what I have mapped and maps elsewhere have a lot to do with decisions made on the ground as to where the boundary is while looking at the species present.  This again can be re-assessed later and remapped easily.

For the purposes of distinguishing between higher and lower quality areas, some places are referred to as grassy areas rather than grasslands.  Higher quality Natural Temperate Grasslands contain a greater diversity of species and include forbs as a component.  Similarly for woodlands high general diversity, a healthy native understorey and diversity within that indicates health.  Very high quality areas warrant identification and further mapping. 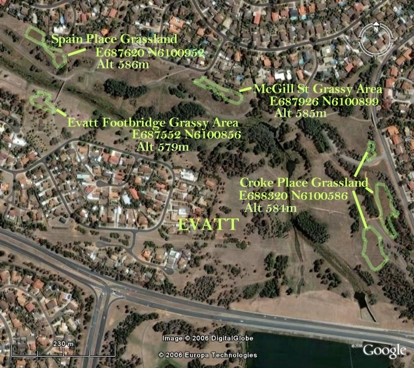 The creek corridor at Evatt contains some very good remnant grassland.  The areas at Spain Place and Croke Place are very diverse examples of this habitat type.  These are recognized grasslands though the North Belconnen Landcare Group has increased the size of one simply by excluding mowers from a greater area after members had observed what species were still present. Dr Ken Hodgkinson who is a grassland scientist, was the primary force in this as he did the work.

The “Grassy Areas” shown are more degraded and mown though the “Evatt Footbridge Grassy Area” is maintained by the group and is a delight of grasses and flowers. Chrysosephalum apiculatum (Yellow Buttons) is the dominant species in quite large patches.

The North Belconnen Landcare Group is shifting its emphasis further towards grassy and riparian areas and away from planting patches that are becoming self-sustaining.  Already many hours have been spent working in the grasslands over the past few years. 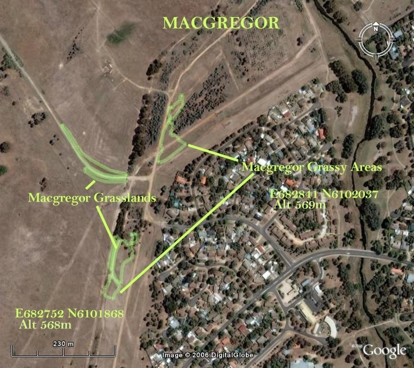 These grassland areas at Macgregor occur along the National Bicentennial Horse Riding Trail as well as the service road to the old sewerage works close to the creek.  The grasslands are quite good though the one along the service road is rather badly shaped.  The shape as well as the size of a remnant is important. The more of its edge that is exposed to threatening factors that exists in proportion to the area it covers the less viable it often is in sustaining itself.  Threatening factors can be adjacent populations of potentially invasive species, soil disturbance, human or animal traffic etc. The affect this then has depends on how bad the disturbance is, just what the invasive species are and so on.  We must always think in terms of multiple interrelating causes and affects when thinking about ecological systems.

This area will be affected by the West Macgregor development.  The National Bicentennial Horse Riding Trail will have parkland around it so it will be important to preserve the higher value grassland areas especially. 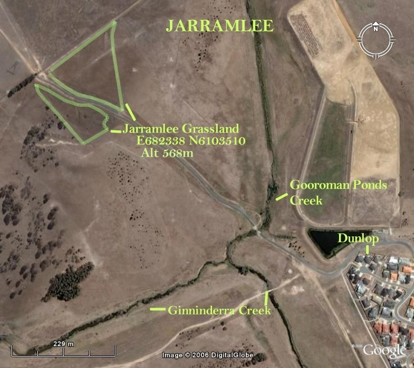 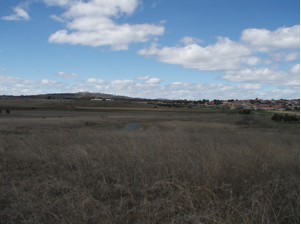 Just outside the entrance to Jarramlee is a large area of grassland.  It appears quite healthy and is partly reserved.  The area that is in a paddock was mapped using this satellite image combine with memory and not on the ground by actually pacing the site out as I usually do. The dimensions would need to be verified. 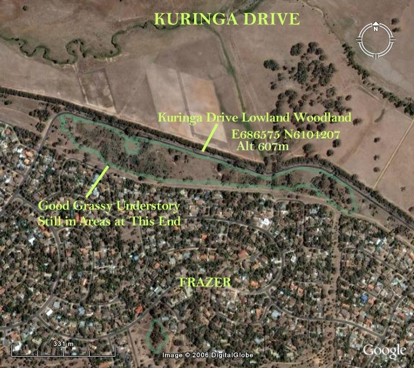 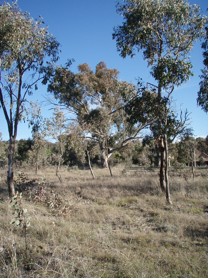 Along Kuringa Drive is a large area of remnant Lowland Woodland.  Areas that like this one that contain mainly Eucalyptus blakelyi are common in the ACT but this Woodland still retains areas of native understorey which is much less common.  Where places like this remain also gives some indication of what areas had more woodland and areas more grassland.  I have been unable to find any large trees that would indicate the woodland community was present close to Ginninderra Creek.  They are however not uncommon elsewhere. The estimated coverage these communities once had prior to European settlement, are in the Grassland Strategy and the Woodland Strategy (supplied). 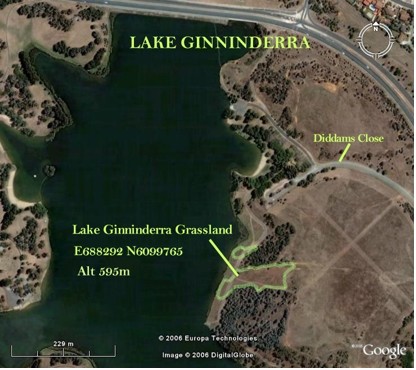 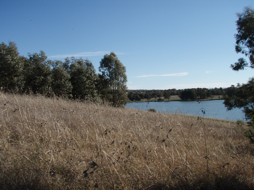 This is quite a large area of grassland on the slopes above Lake Ginninderra.  It has Tall African Lovegrass growing in areas and around it. It is worth having a look at this grassland both for its own sake and to see this weed.  It is more robust than what I am used to seeing.

I want to revisit this area also when species are in the flowering stage. 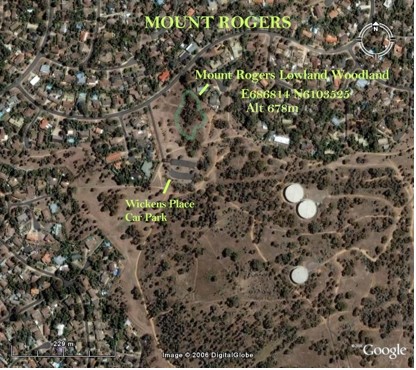 Mount Rogers retains a nice area of Lowland Woodland.  The area mapped still contains native understorey species with quite a lot of Poa sieberiana.  This species is quite common on Mount Rogers. Some areas may give leads as to what vegetation type was typical on some large hills like this one.  I do intend to go back and map these with Rosemary Blemings who has already made up hand drawn maps to show them. The Dominant tree species was Eucalyptus blakelyi and I believe the stump below may have once been one huge example. 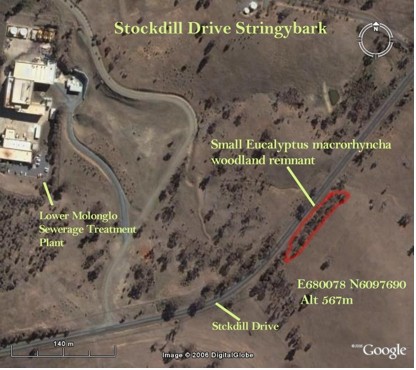 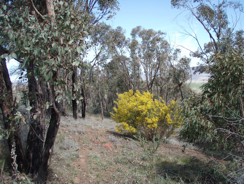 This small site is outside our catchment but along with the Red Stringybark woodland remnant at the Pinnacle, it offers an example of this woodland type which tends to thrive on poorer soils. This very small remnant is on part of a ridge and has no larger old trees.  It does have a very nice understorey still intact which even includes some Yellow Burr Daisy (Calotis lappulacea) which is also present further up the road. 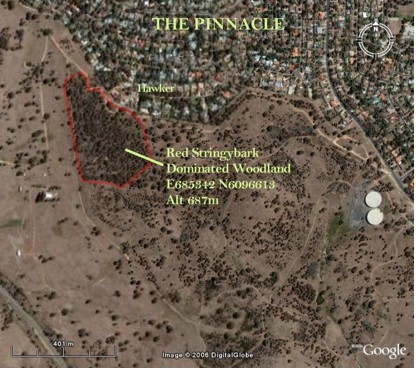 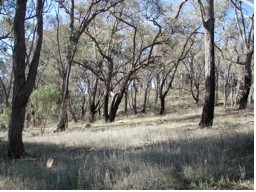 Part of the reserve known as “The Pinnacle” consists of a very good Red Stringybark woodland remnant.  It is situated on a slope just outside of the Ginninderra Catchment. This was a plant community commonly occurring on sites like this. It was once much more widespread on our hills and ridges and on poorer soils.  The Red Stringybark at Mulligans Flat has an understorey dominated by Red Anther Wallaby Grass (Joycea pallida).  The understorey in these areas is very different and includes other grasses and shrubs like in this case Cassinia longifolia and Indigofera adesmiifolia. 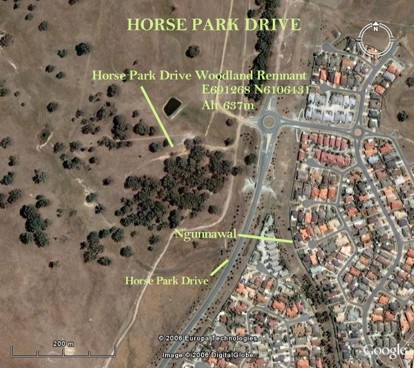 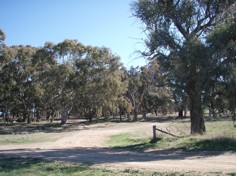 This is just one of the many Lowland Woodland remnants to be found in the Gungahlin area.  This one has a heavily modified and disturbed understorey but some very interesting old trees remain.  The tree in the foreground is a large old Red Stringybark (Eucalyptus macrorhyncha) and behind it Blakely’s Red Gum (Eucalyptus blakelyi) dominates. 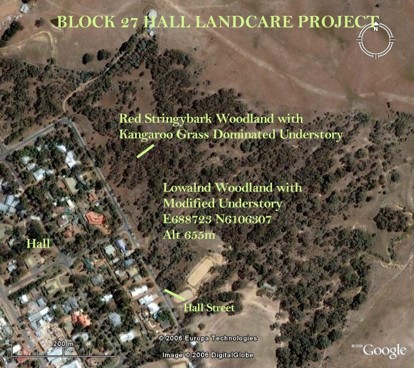 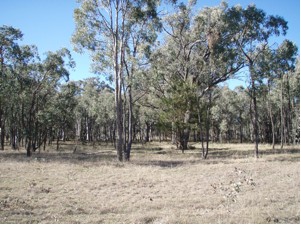 A very good woodland remnant with the best native understorey I could see being beneath the Red Stringybark (Eucalyptus macrorhyncha) dominated area below. 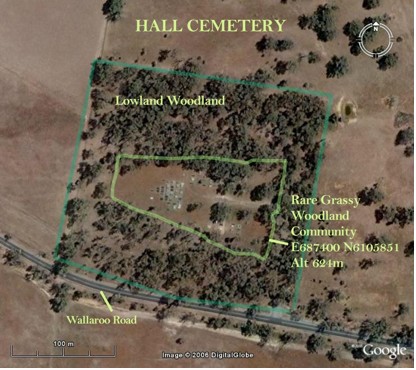 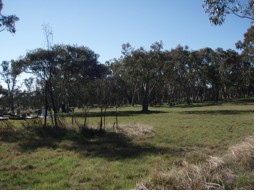 Hall cemetery is down Wallaroo Road not far off the Barton Highway.  It is one of the best remaining areas to see what the natural grassy understorey of our Yellow Box/ Red Gum Grassy Woodlands is like. Cemeteries due to their often long history can often provide this sort of haven to indigenous plants.  They had no reason to be modified, as they were not grazed. 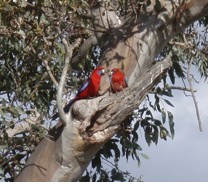 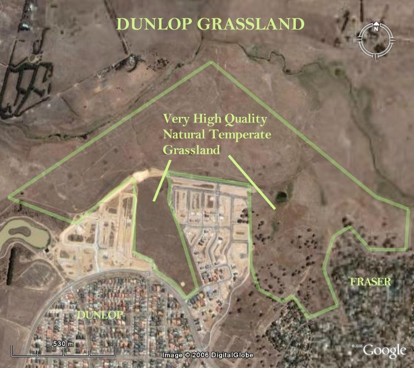 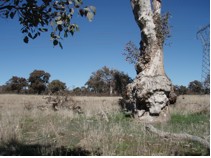 This is a reserve that some members know very well.  It contains both high quality Natural Temperate Grassland and Yellow Box/ Red Gum Grassy Woodland.  The area indicated on the right I have heard referred to as Wet Themeda Grassland. 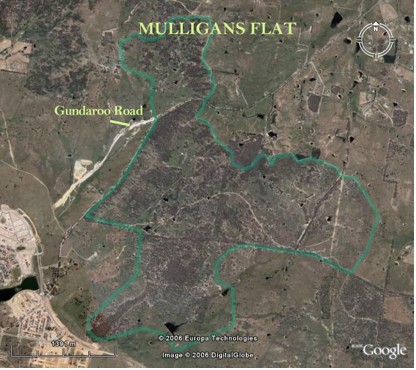 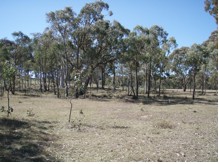 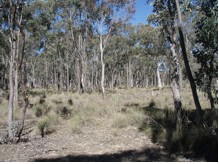 In Mulligans Flat and in neighbouring Goorooyaroo Reserve are some of the best examples of Yellow Box/ Red Gum Grassy Woodland to be found anywhere.  A walk through these reserves gives the best indication I know of what a very large proportion of the environment was like in this catchment.  Other woodland types are also represented as well as a variety of understorey species.  It is a wonderful place that deserves its reputation and is one of our most valuable assets.  Suburbs are now being built closer to the park.  Their impact has to be managed well. 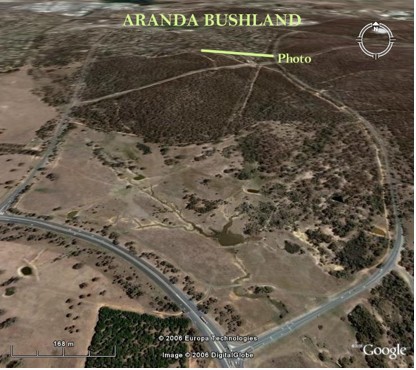 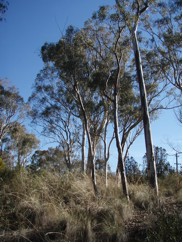 Though Aranda Bushland is almost entirely outside of our catchment, it still provides another very valuable insight into what similar areas within the Ginninderra Catchment were like.  It does actually meet with the very edge of the Ginninderra Catchment and this photo of a Scribbly Gum (Eucalyptus rossii) and Red Anther
Wallaby Grass (Joycea pallida) dominated community is taken from just within our catchment boundaries (see satellite image above).

The Friends of Aranda Bushland’s publication “Our Patch” is a valuable resource to anyone wanting to understand the plants of this area. 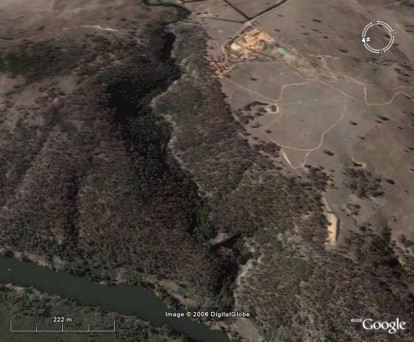 Unfortunately this area is a private park and closed to the public.  Historically, this park did provide access to where Ginninderra Creek meets the Murrumbidgee River and is unique and botanically rich. 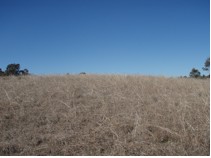 For Umbagong District Park I have mapped some of the areas of interest to the Umbagong Landcare Group.  The stand out remnant here is the Blue Devil Grassland that is one of the best grassland areas we have left.  The other areas mapped are a mixture of very good to very degraded Natural Temperate Grassland.  These areas could lend themselves well to grassland restoration and maintenance trials in the future. They have a Landcare group that knows them well and much of it is removed from human traffic and the possibility of mowing.

Go to the next section in The Picture Now, “2. The Creeks”.