The August 2022 floods caused sandbars to obstruct footpaths and transported rubbish into Umbagong District Park. Find out how local volunteers helped with the clean-up.

During Canberra’s heavy rainfall in the 1st week of August 2022, Ginninderra Creek rose at least 2 metres higher than its bank. This threw up huge sand bars in some places, including at the stepping stones, Umbagong District Park, Latham. This made the path difficult to cross. 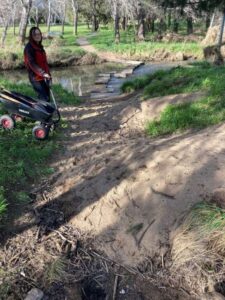 Photo (above): Sand bars covered the path both sides of the stepping stones (Macgregor side was the worst). 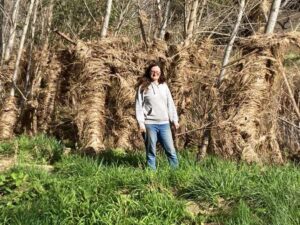 Photo (above): Height of the debris caught in poplars above Ginninderra Creek on the bank above the stepping Stones, Umbagong District Park, Latham.

While the path nearest the river was covered in too much sediment, a little higher up, the edges of the footpath had eroded away and had too little soil. There was a dangerous drop off the edge of the path of 10-20cm where people could sprain an ankle or come off their bike if they went too close to the edge of the path. 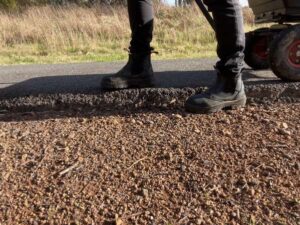 Photo (above): Showing one of the areas where the path edge was a potential hazard to cyclists and ankles of pedestrians, with erosion also causing the slope to fall steeply away downslope from the path. 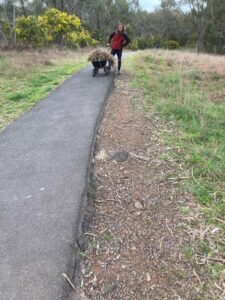 Photo (above): An eroded section of path.

This problem originated when mowers mowing the footpath had machines set too low to the ground and accidentally scalped the soil. Sheet erosion quickly followed as the fragile soils were no longer protected by grasses. The height of the footpaths were also augmented when the paths were resurfaced a few years ago, all of which resulted in a dangerous edge.

To rectify both these problems, volunteers from Umbagong Landcare Group borrowed a cart and shovelled river sand and sediment from the path and pushed / pulled it up to higher ground to stabilise the edges of the path. The aim was that if someone accidentally stepped off the path it would be less hazardous than it would have been with a steep drop off the edge.

As most of the sediment was river sand, in some places we placed sticks across-slope to help hold it in place so it wouldn’t just wash away in the next storm event. For the same reason, we gathered reed debris that had washed up and used it as mulch. Rosemary Blemings provided us with some native Rytidosperma seed (Wallaby grass). So we then scattered the wallaby grass seed over the top in the hope that it would germinate and eventually stabilise the sand. 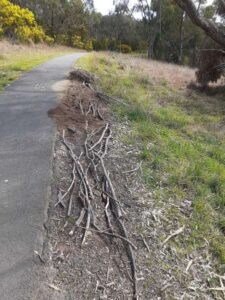 Photo (above): Underlay of sticks across slope to help hold the sand in place so it won’t wash away. 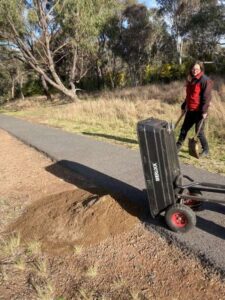 Photo (above): One load of sand… doesn’t go very far! 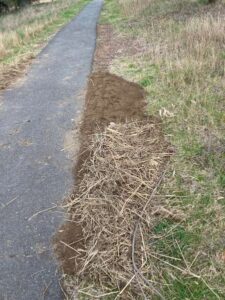 Photo (above): Firming the soil down with feet and then covering with reed debris. 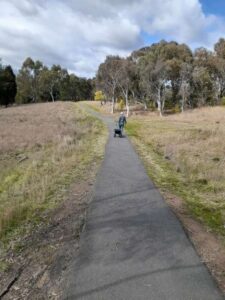 Photo (above): A long way back to the river…

Roughly 60 linear metres of path edge were filled in with river sediment (counting each side of the path separately). 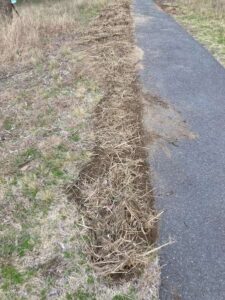 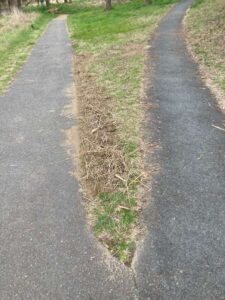 Photos (above): Completed sections of path.

We also filled in an area of soil below the stepping stone bench that had eroded where tree roots were starting to be exposed. We shaped the soil into ridges across-slope in the hope that it might prevent sediment ending up on the path in future. 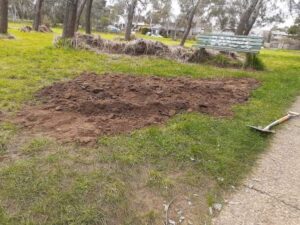 Photo (above): Back-filling an eroded area below the park bench near the stepping stones, the origin of some of the mud coating the path. Shaping the soil into ridges across slope just visible. 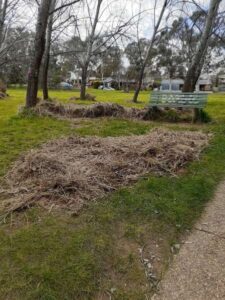 Photo (above): Then covered with reed debris as mulch.

The sediment on the path showed some beautiful stratification of build up in successive flood events. 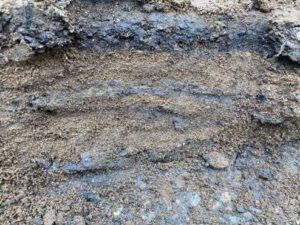 Photo (above): Stratification of the sand bar over the path (Latham side) from successive flood events, showing the importance of repairing and stabilising the eroded patch of soil (presumed origin of the mud layers) just below the park bench. 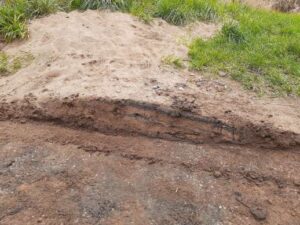 Photo (above): Cutting a track through the sand bar (Latham side). 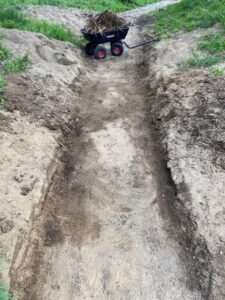 Photo (above): Carving a track through the sand bars (Macgregor side) that had washed up over the path to the stepping stones. The barrow is full to the brim of sand and then topped with reeds for mulching. 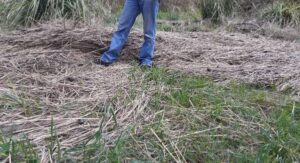 It took two of us us three days to do, a total of 6.5 hours. The work was very heavy and intensive as it was all done by hand without the aid of machines like bobcat. The sand, still being wet, was very heavy to cart up hill. About 2 hours at a time was the limit. 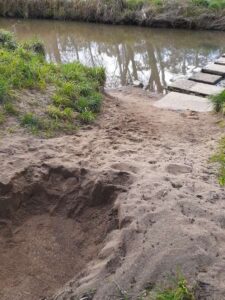 Photo (above): The depth of the sand bar near the stepping stones. 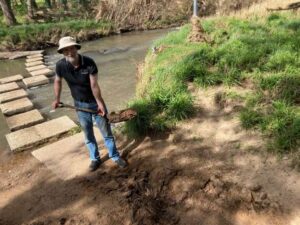 Photo (above): Breaking through the sandbar! 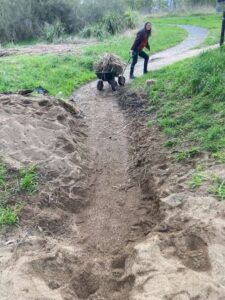 Photo (above): Pulling the cart up from the river. The loads were heavy and it actually required two of us to haul the cart up to where the path edges were eroded.

The water also caused Gross Pollution Traps at either end of the park to overflow, washing in huge quantities of rubbish. This rubbish is a hazard for wildlife. Waterbirds are particularly susceptible as they swallow it and it doesn’t pass through their systems and they can end up starving to death. When small plastic crumbles into micro-plastics, it gets into the food chain.

While transporting the sand, we collected half a garbage bag of rubbish that had ended up on and around the sand bars.

For the following landcare working bee 3rd September, the landcare group cleared up plastic, clothes and other rubbish either side of Ginninderra Creek for about 100m of Creek and river flat. 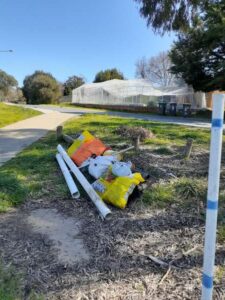 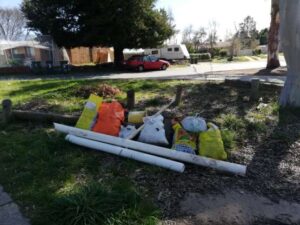 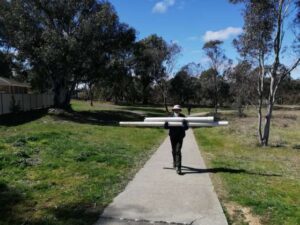 Just think, with help from a few more locals, we might have been able to clear the whole creekline!

Want to find out more about Umbagong District Park and how you can get involved? Check out Umbagong Landcare Group and consider joining – they’d love to have you!