"> Turtle Time! Not one, but 41 - Ginninderra Catchment Group

As a citizen scientist you have to be prepared for those days when you go out to monitor waterways for signs of life and don’t find a thing. And then there are the days when you discover 41 Eastern long-necked turtles across four sites in an urban setting.

Forty-one turtles in McGregor with houses less than a hundred metres away. 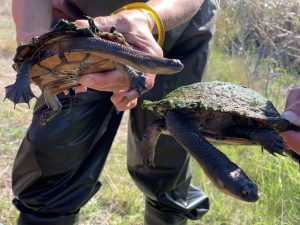 For this project, funded through CEP grants from the Ginninderra and the Canberra Electorate, four stormwater ponds in West Belconnen and in the Inner North will be surveyed monthly for the presence of turtles. On a survey day, four specialised turtle traps per site are set in the morning, and checked and removed in the afternoon.

On the day in question when the turtle traps were checked at the first two study sites, scientists and volunteers were disappointed.

But Bruno, who had prophesied that the third site would be different, told the group he “had a feeling about that  one”. And he was right.

Anke Maria, up to her neck in waders, pulled the first trap from the water as onlookers yelped in delight.

“Five! I’ve got five turtles!” she cried from the pond.

But as she brought them ashore: “Not five! Fifteen!”

And so it continued. Trap after trap was full of turtles just waiting to be weighed, measured, identified and marked before being released back into the water.

The group captured, marked and released 23 Eastern long-necked turtles at Fassifern Pond and 18 at Jarramlee Pond.

Anke Maria said it was great to see that such high numbers of turtles are possible in urban wetlands.

During a similar activity at four wetlands in the Inner North in late September, only one turtle was found, at the Banksia Street Wetland.

“Over the next few months we will develop a better understanding of the population sizes and distribution of the Eastern long-necked turtle and how urbanisation might affect them.”

“I’ve never seen as many turtles as this,” he said.

Volunteer Lyn Jenkins, Convenor of the MacGregor Landcare Group, did not want to miss the chance to learn more about the local environment by partaking in the project. 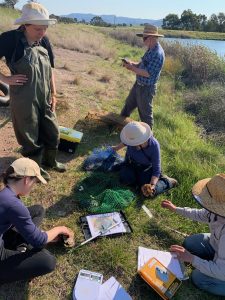 “I’ve had turtles in my yard, which is close to the Ginninderra Creek. I am  interested to see how turtles in the study ponds may be impacted by effects of urbanisation, such as runoff.

“I love being out here.”

Local residents passing by stopped to investigate what was happening, one pair staying for an hour to volunteer their time, asking how they could join the project.

And you can be out there too. New volunteers are always welcome in the Waterwatch and FrogWatch programs so to get involved please call the Ginninderra Catchment Group on 6278 3309.

FUN FACT: What’s the difference between a Turtle, Tortoise and Terrapin?

Turtle, tortoise, and terrapin are all names for the hard-shelled, egg-laying reptiles in the taxonomic order Chelonia. Basically, they’re all turtles. The exact name used for a particular type of turtle, though, can vary depending upon where they live or where YOU live.

People in different parts of the world use different names depending upon the specific type of turtle they’re talking about. For example, the name “turtle” is used most widely and usually refers to those turtles that spend most of their lives in or near the water.

Turtle is often used to refer to sea turtles that rarely leave the ocean. Of course, turtle can also refer to the many types of turtles that live in freshwater, such as lakes or ponds.

The word “tortoise,” on the other hand, is usually used to refer to turtles that spend most of their time on land, eating shrubs and grasses. Unlike their aquatic relatives, tortoises don’t have webbed feet, since they don’t spend much, if any, time in the water.

So what about “terrapins”? Terrapins are turtles that spend time both on land and in brackish, swampy water. The word “terrapin” comes from an Algonquian Indian word meaning “a little turtle.”