"> Out to pasture: Trees are important, but grasslands are vital too - Ginninderra Catchment Group

Ginninderra Catchment Group’s Grassland Restoration Projects were given a boost by volunteers in early May with everyone from scouts to MLAs attending a planting at Croke Place.

The projects are focused on restoring the native grasslands of the catchment.  They aim to stop the shrinking of native grass patches and extend and help connect these patches throughout our beautiful region.

Dr Ken Hodgkinson, convenor of  the GCG Native Grasslands Restoration Landcare Groups said the group is looking to replant colourful and hardy species that will spread and thrive in the area with the help of the local Lions Croke Place Landcare Group.

“What we’ve been doing is planting back into some of this natural temperate grassland,” he said.

“They can disappear and here we’ve seen about 150 years of grazing. We know what species are still here so we’ve purchased tube stock and we’re planting more of them here at Croke Place. 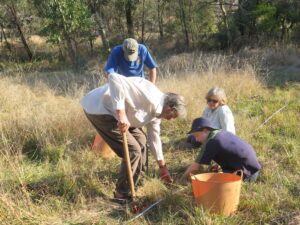 “We’re trying to find out which ones spread well and survive drought and we’ve had great success with some species planted two years ago.”

Historically, the majority of lowland areas in the ACT, as well as broader NSW, were covered in natural temperate grasslands.  Now, because of extensive land clearing and grazing, less than five per cent of the native ecological community remains in the ACT and less than 0.5 per cent nationally.

This is why grasslands are an important focus for environmental management, especially in the ACT where some of the largest or highest quality areas of natural temperate grasslands remain.

Jo Clay, Greens MLA for Ginninderra attended the planting and said she grew up in the area but was always finding new hidden gems like Croke Place.

“I really like doing environmental work on the weekend, getting out to all the parks and seeing what people are doing on the ground,” she said.

“It’s great for us to be able to speak with experts like Dr Ken Hodgkinson to find out what we can do to help as Government and also when we need to get out of the way sometimes. 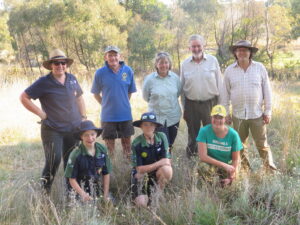 “We are working hard in the environmental space, we’re starting to appreciate grasslands. I think everyone loves trees but I think we are starting to understand the importance of other precious habitats too now,” she said.

Natural temperate grasslands of the South Eastern Highlands are nationally listed as a critically endangered ecological community. Many threatened and endangered animals live within NTG habitat, including the Superb Parrot, Striped Legless Lizard, and the Golden Sun Moth, as well as others.

There were a number of scouts at the event who were interested in local threatened species. Isabelle Gaul said she wants to look out for the environment.

“I’m part of the Kama scout troop,” she said. “There are 20 scouts all up and we all like to get involved.”

The local Lion Club started the Croke Place Landcare Group which is how the scouts got involved.

“My Pa is a Gungahlin Lion so I contacted him because I knew they were doing something to do with planting and here we are.”

There are three main components of the project including weed control, the planting of native grassland species into priority grassland areas, and community engagement.  Each of these components are recognised in the National Recovery Plan for Natural Temperate Grassland of the Southern Tablelands in the ACT and NSW and the ACT Native Grasslands Conservation Strategy (2017).  All the sites have been chosen based on grassland quality, potential for restoration and community engagement.

The project is based on the Ginninderra Catchment Group Grassland Restoration Strategy and aligned with the new draft ACT Government Grassland Strategy. It value-ads to existing ACT and Commonwealth funded projects. – project is directly funded as part of the ACT Environment Grants program.